Some crime-fiction writers chronicle their series protagonists’ careers through dozens of books. Donald Westlake, under the pseudonym Richard Stark, followed the exploits of a murderous crook named Parker for more than 20 novels. Leslie Charteris’s thief, the Saint, plundered through more than three dozen books. Other authors—by chance, design or necessity—say what they must in a handful.

Such was the case with Ted Lewis (1940-82), whose English hoodlum Jack Carter made an indelible impression narrating a trio of hard-hitting novels from 1970 to 1977, and became a permanent part of pop culture thanks to a 1971 movie adaptation, “Get Carter,” starring Michael Caine. All three novels (with supplementary essays by writers Nick Triplow, Max Allan Collins and “Get Carter” film director Mike Hodges) have recently been reprinted as the premiere project of the new reissue imprint Syndicate Books.

The novel then known as “Jack’s Return Home” was published in 1970. In it, a London gangster recounts a pilgrimage back to the middle England steel town of his youth to avenge the killing of his straight-arrow brother at the hands of local hoodlums. The book gave readers a brutal look at hitherto hidden English sleaze and seediness. “It ripped off the rose-tinted glasses through which most people saw our mutual homeland,” writes Mr. Hodges. Forty-four years later, the book, renamed “Get Carter” (Soho, 215 pages, $14.95) after the film, still has the power to jolt.

Now as then, it’s Jack Carter’s professional, clinical, unapologetic application of force that seems most disturbing—as when Carter describes confronting one of the criminals he’s been surveilling: “He was only six feet from the car when he saw who had come to collect him. He gave a short high scream and dropped the hold-all. Then he began to run. I got out of the car and leaned back in and picked up the shotgun . . . I had plenty of time and there was nowhere for him to go. . . . I could hear him scrambling over miniature screes of brick that had fallen from the decaying walls. The sound had the rattle of death.”

Carter tracks those responsible for his sibling’s murder through the village he left 23 years ago: “On the surface it was a dead town. . . . But it had its levels. Choose a level, present the right credentials and the town was as good as anywhere else. Or as bad. And there was the money.” Much of that cash is tied up in dodgy setups: betting shops, booze parlors, shabby improvised studios churning out blue movies that get sent to London for distribution.

The blue-money crew here has ties to Jack’s London employers, Gerald and Lee Fletcher, brothers “in the property business,” Jack says with a wink and a nudge. “Investment. Speculation. That kind of thing. You know.” Just as tactful, the Fletchers caution Carter against doing anything “thoughtless” in his hometown: “[Y]ou do good work for us, Jack. . . . it’d be an unnecessarily difficult job finding someone to replace you.”

But Carter is the last man likely to heed a warning. Fed up with doing the Fletchers’ heavy lifting while they take the bulk of the spoils, he’s poised to abscond with their purloined riches—and Gerald’s wife—to South Africa. Nonetheless, Jack’s determined to enact rough justice for his brother. So the Fletchers send a two-man team to persuade Carter to abandon his lethal plan.

According to Nick Triplow’s biographical sketch of Lewis (appended to “Jack Carter and the Mafia Pigeon”), even though the author had published an earlier well-received autobiographical novel, his agent refused to represent the first Carter book on the grounds that it was too violent. Another agent found the work a publisher, and sold the movie rights as well.

Critics praised Lewis’s novel, though some were taken aback by its “amoral” tone. Mr. Hodges’s film got good reviews in the U.S., but poor distribution. Posterity has been kind to both works. A new generation of tough British thriller-writers (including David Peace, Stuart Neville and John Williams) has cited Lewis as an influence; “Get Carter” has been hailed by Quentin Tarantino and other filmmakers and critics as one of the best British movies of all time.

Back in the ’70s, though, Ted Lewis scuffled to make good on the success of the renamed “Get Carter.” He wrote another noir caper (“Plender,” 1971) and another autobiographical novel (“The Rabbit,” 1975), but Carter was his ace in the hole. A sequel was out of the question, though, given the first book’s denouement. The solution was a 1974 present-tense prequel, “Jack Carter’s Law” (Soho, 213 pages, $14.95) which sees Jack hard at work for the Fletchers in London, trying to squelch a plot to put the brothers’ firm—and Carter—out of commission.

Carter is no hero, killing rival villains without compunction, manipulating one and all (male or female) to his advantage. But he does have a darkly contagious sense of humor, and his observing eye is keen and mean, as always.

Of the “would-be heavies” guarding a nightclub’s front-door: “They stand there . . . with their hands behind their backs the way they think the real ones do it. Their hair is washed and blown . . . and the hardest time any of them ever had is fighting a cold.” Of a pub’s garish-looking landlady: “She’s got platinum hair and lips that don’t conform to her idea of them, judging by the way she’s drawn them on.”

Of a spoiled copper who’s found out he’s about to be exposed in the press: “The cigarette smoke wreathes upwards round his ears making his head look like a boar’s that’s just been served up on a plate.”

“Jack Carter’s Law,” with its crude and cutting banter, grotesque but fascinating characters, tense situations and exhibitions of ill grace under pressure, is almost as good as “Get Carter.” This is not the case with the third and last Carter book, “Jack Carter and the Mafia Pigeon” (Soho, 282 pages, $14.95) though this unpredictable item published in 1977—in which Jack is tricked by the Fletchers into a Spanish “vacation,” which turns into an assignment protecting a near-hysterical American hood—is not without its odd appeal. To his credit, perhaps, the author tried something new, emphasizing Carter’s mischievous black humor to the point of near-farce. But inevitably, farce gives way to bloody doings; and the book’s disparate parts don’t mesh.

Ted Lewis wrote other books, for a total of nine, before succumbing to alcoholism at age 42. The last of these, 1980’s “GBH” (Soho, 323 pages, $26.95), is an innovatively structured tale told in the first person through alternating chapters, half in the past and half in the present; it’s narrated by a London mobster doing battle both with underworld rivals and inner demons.

George Fowler, head of a blue-movie racket, doesn’t think twice about torturing or killing to protect his interests or fulfill his desires. Among his earliest victims was his conscience—or was it? As he hides out off-season in a gray seaside town, mulling past criminal and sexual exploits, Fowler’s sure he’s being followed by an elusive young woman. Is she trying to rescue him, or bent on destroying him? Or maybe she’s some sort of phantom, feeding on his cannibalistic paranoia?

“GBH” shows Lewis stayed true to his unnerving vision and voice to the end, even while pushing it into farther-out places. This hitherto-obscure book’s resurrection should further enhance the Lewis legend. For now, Ted Lewis’s reputation has rested on a mere two titles—making all the more impressive the lasting impact of this realistic novelist of English mobsters, a writer responsible (in critic Mike Ashley’s words) for “opening a new vein in crime fiction.” It’s one other scribes have tapped ever since.

Many hours of research have gone into the preparation of the trail. It identifies 14 principal places of significance in the life and books of Ted Lewis. 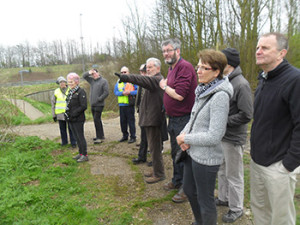